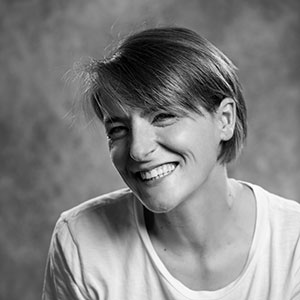 Forty-one years old, from Abruzzo, Valentina loves yellow, a little less order, odd numbers, hates symmetry and does not distinguish right from left. Stubborn, Scorpio and Juventine. After high school, she choose to study Chemistry and Pharmaceutical Technology at the University of Annunzio in Chieti with an exchange experience at the Complutense University of Pharmacy in Madrid. She graduated in 2004 with a thesis in the Department of Pharmacology of D’Annunzio and immediately after obtaining the qualification to the profession of pharmacist after the state examination. At the same time as high school and university studies, she attended the Conservatory of Music “Luisa D’Annunzio” in Pescara, and at the age of 21 she obtained the diploma of Principal Piano.

The goal up to that point is to become a researcher for the pharmaceutical industry. Bread, science, mathematics and classical music fill her days as a clumsy and introverted twenty-year-old. Let’s start the interviews, one after the other. A positive answer came from a French pharmaceutical company. But her sudden smile and a timid “thank you but I can’t” to the director of human resources are enough to call it all into question. Only then did she realize that the path to follow was another one: after years in the laboratories at the University between test tubes, agar agar cultures and white coats, the family business knocked on the door.

She began her studies in Enology and Viticulture at the Faculty of Agriculture of the University of Teramo and in 2007 she graduated with a thesis on the socio-economic situation of Abruzzo wineries (after having wandered for months in the Abruzzo wine region). A young winemaker full of doubts and questions amidst a wine world full of confident, suspicious and impenetrable men. Valentina has been living full time in Abruzzo for more than ten years, taking care of Tenuta i Fauri, a family business, dealing with marketing, hospitality, and communication. Member and former delegate for Abruzzo of the National Association Women of Wine, member ONAV, former member of the Board of Directors of the Consorzio di Tutela dei Vini d’Abruzzo.

How to use wine apps to increase sales and market share

Wine apps have made some changes since they first hit the scene. For wineries is critical to optimize opportunities that wine apps can offer. Helping consumers get the right wine for them, collect valuable consumer data, and shorten the sales cycle are just a few examples of the benefits provided by wine apps. Which wine apps are still relevant? Which ones will impact your bottom line? And how can wineries use them to stay ahead of the trends and increase sales? Amy Gross, CEO of VineSleuth, is back to share an overview of the wine app landscape and give a deep dive into key apps to watch. She will suggest practical strategies for working with wine apps (both directly and indirectly), analyzing the data they share, and growing your business and digital footprint.