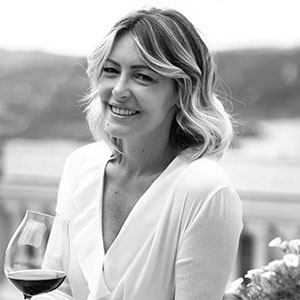 Valentina Abbona is the 6th generation at Cantine dei Marchesi di Barolo together with her brother Davide. She has a passionate and profound relationship with wine, which, for her, translates into emotion, feelings, history, terroir and – above all – home. Her experience began in the family’s cellars – a pull at the heart every time she returns from long journeys – and it is here that she finds inspiration each day. After graduating from the Liceo Scientifico in Alba, she moved to Milan where she attended Bocconi University, graduating in Business and Economics.

During these years, her personal and professional training grew constantly thanks to various exchange programs that allowed her to deepen her knowledge of the wine sector and which took her from Manchester to Hyderabad (India) and then to New York. Her highly “international” career continued in Shanghai, where she worked for about a year for a prestigious family consultancy firm. During her time at university, she also accompanied her mother Anna on numerous business trips around the world, allowing her to hone her skills. She was exposed to diverse perspectives and learned how to exploit them – coming to understand the crossroads of tradition and innovation that are represented by Marchesi di Barolo.

Today, Valentina is one of two female faces representing Marchesi di Barolo, together with her mother Anna they carry on the dream and to honour their female lineage, which includes: Juliette Colbert de Maulévrier, descendant of the Minister of Finance, the Sun King and connoisseur of good wine. Having moved to the Marquis Carlo Tancredi Falletti’s estate after her wedding, Juliette immediately sensed the potential of the grapes grown in Barolo: her vision and perception of these lands gave rise to what is now considered the king of wines and, not by chance, the wine of kings.

With the help of her parents – Anna and Ernesto – and her brother Davide, Valentina follows her own path, always looking ahead and trying to realise the dream that all this brings with it: a family committed to producing high quality wines, to be shared with many enthusiasts, in an increasingly aware market.

Travel in a bottle, virtual tasting in the time of lockdown and beyond

As travel was not possible during the months of Lockdown, many involved in the world of wine found new ways to connect. The aim of this session is to look at the different ways people in wine have connected through virtual wine tastings during Lockdown and identify some of the benefits for various sectors: wine journalists and writers, wine educators, wine students, wine sellers, wine consumers. The ability to connect with producers, customers, educators, students at a time when travel has not been permitted has been vital for many businesses and it seems that the connections made through utilizing new media (Zoom, Microsoft Teams, etc) will be here to stay, even after life returns to ‘normal’. This presentation seeks to explore the benefits for the various sectors as well as some of the difficulties and downsides. To achieve this, Marc Millon surveyed about 50 people across the industry and will be analyzing the results. His hope is that the session will lead to a lively discussion as people attending relate their own experiences. It will be very interesting to hear your thoughts from the point of view of a wine producer.