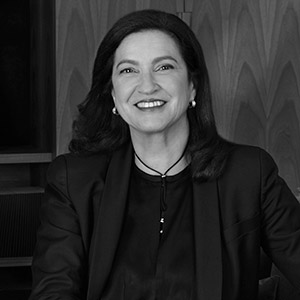 Margareth Henriquez, better known as Maggie, is a seasoned professional with over 42 years of experience, 31 of which she has spent as President and/or CEO of multinational or global companies in Venezuela, Mexico, Argentina and now France. Since 2009 she has been President and CEO of the House of Krug in Reims, France. Krug is the first and still unique Champagne House to create only Prestige Champagnes every year since it was founded in 1843.

During her career, Maggie was a member of the Association of Manufacturers in Venezuela and Mexico; the international executive committees of Seagram; Nabisco; Moët Hennessy (Latin America, Caribbean, Canada and Middle East); Moët Hennessy Estates & Wines, and now belongs to the Moët Hennessy International Executive and Operational Committee. She also was a Professor of New Product Development for International Markets and Strategic Alliances at the Universidad Panamericana, and has conducted seminars on topics ranging from Wine, Champagne, Luxury Brand Building, Strategy and Marketing Facing Crisis, Leadership and Women’s Development.

Among other recognitions, she was honored with the title of “Keeper of the Quaich” by the Scotch Whisky Association in 1993. In 2008, for the tenth consecutive year, she was named among the top five executives of the year by the Argentinian Fundaciôn Konex. In 2013 she was recognized as Woman of the Year by Drinks International, the UK’s most important trade publication. In 2018, Maggie ranked 37th among the 200 most influential people in the wine industry by the Revue du Vin de France and was designated one of the sector’s 10 most influential women. In 2019 she has been selected by Bettane et Desseauve as the wine personality of the Year 2020.

Verbal communication about wine, broadly treated like the default, has its limits, potentially hindering our ability to reach new customers and capture their imaginations, particularly as the market for wine expands into new regions and cultural contexts.  Non-verbal communication about wine, while not yet mainstream, is being employed by different players within the wine industry to intriguing effect.  The session will feature two major examples of non-verbal sensory content related to wine, exploring lessons learned and impacts on the relevant wines/brands.