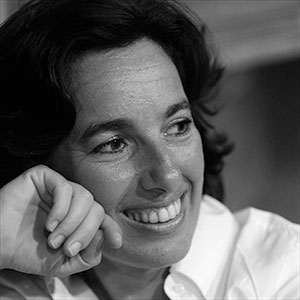 José Rallo represents the fifth generation of a Sicilian family with 160 years of experience in quality wine. She graduated in Business and Economics at the S. Anna School of Higher Education and Specialization in Pisa with the highest degree “cum laude plus honorable mention”. After a professional experience in international management consulting companies, in the early 90s José Rallo joined Donnafugata, the family winery founded in 1983 by her parents Giacomo and Gabriella. Together with her brother Antonio, she is today the managing director. Donnafugata has 5 wineries and over 400 hectares of vineyards between Marsala, Contessa Entellina, Pantelleria, Etna and Vittoria, all territories with extraordinary potential. Face and voice of the company, José Rallo leads the marketing and public relations team, oversees management control and the quality system. She is committed to the eco-sustainable and cultural development of her territory: from energy savings to the production of energy from renewable sources, up to the certification of the carbon-footprint; for 20 years she has supported the Scuola Normale di Pisa in archaeological excavations in Sicily and financed the “Giuseppe Nenci” Study Award.

José  Rallo innovated the style of wine communication with the “Donnafugata Music & Wine Live”, proposing as a producer and solo voice multisensory experiences of wine and music that have given rise to two CDs and memorable concerts at the Blue Note in Milan and New York, Beijing, Shanghai and Moscow, and at the Acropolis Museum in Athens, also raising funds to support solidarity initiatives. She has furthermore developed hospitality activities at the Donnafugata wineries which today receive over 10,000 winelovers a year, for guided tours and sophisticated tastings, as well as for special events promoting the culture of wine such as “Open Cellars” and “Calici di Stelle”. In collaboration with the FAI (Italian National Trust), in 2018,  she organised the art exhibition “Inseguendo Donnafugata” held at Villa Necchi Campiglio, in Milan, dedicated to the illustrations of the artist Stefano Vitale who for over 20 years have given life to the company’s labels with an extraordinary feminine  and fantastic identity trait. Her sensitivity led her to communicate an innovative Sicily and the excellence of Made in Italy, in the dialogue between art, wine and sustainability; an example of these values, and in particular those of craftsmanship and creativity, is the partnership with Dolce & Gabbana which in 2020 gave birth to two wines, distributed all over the world.