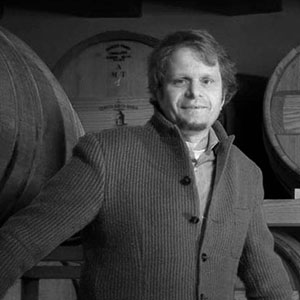 Giovanni Bertani of the Tenuta Santa Maria alla Pieve estate near the historic city of Verona is heir to a grand tradition of winemaking in northeast Italy’s Veneto region, where his family name is synonymous with many of the region’s finest, most admired wines.

As chief strategist charged with fashioning a new vision for his family’s future and forging it into reality, Bertani becomes the latest in a long line of winemaking pioneers, with a documented legacy of winemaking tracing back over 400 years.

With his fluency in English, embrace of modern technology, communications and the arts, and a comfort level spanning both sides of the Atlantic, it’s a role that he was born to fill. 2013 marked the end of a critical period of transition for Bertani and his family and the advent of a new and exciting era, as they moved ahead with the newly established Agricola Gaetano Bertani e Figli (& Sons).

Their latest and most ambitious undertaking, the venture is an outcome of the division of assets arising from the 2012 sale of the family’s Cantine Bertani label.

“We’ve been looking forward to this moment for a long time!”

Giovanni remarks of the enterprise, named for his father, family patriarch Gaetano Bertani.

“My father, brother and I now enjoy full autonomy to make our own wines, from our own vineyards, in our own wineries, working with our chosen winemakers, in the way we wish, with a clear, undivided focus on quality – wines that are in every way a proud and true expression of their local terroir.”

In addition to the Tenuta Santa Maria winery and estate, the new company includes the 18th century neoclassical Villa Mosconi (formerly known as Villa Novare), its winery and prime vineyards adjoining the property, plus additional vineyards in the Veneto’s Valpolicella zone.

With a collective total of 123 acres of vineyards, Agricola Gaetano Bertani e Figli is one of the single largest owners of vineyard in the Veneto. Pioneering new directions is part of Giovanni Bertani’s DNA.

Several new initiatives have been set in motion, including a new range of wines targeted for release within the next two years.

Thanks to his passion for the arts, work has already begun on restoration of the property, designed to transform it into a major travel destination for visiting wine lovers and a magnet for the performing arts.

Despite a seemingly pre-destined role in the family wine business, Giovanni Bertani has been determined to prove himself from an early age.

Successive vintages were spent working alongside his father and learning from Tenuta Santa Maria’s consulting winemaker, the eminent enologist, Franco Bernabei. Summer camps at Lake George, NY, introduced Giovanni to the U.S. and helped ensure his fluency in English.

A degree in communications from the University of Trieste was followed by E.U.- sponsored programs at John Moore University, Liverpool, and London’s Central Saint Martin’s College of Art and Design.

During his student years, summers were devoted to working at the Tenuta Santa Maria estate in various capacities, including PR and assistance with new packaging and label design.

After completing his studies, Bertani spent the next 10 years working for two cuttingedge Italian ad agencies, e-tree and H-Art, with clients ranging from Vodafone to the Vatican, In 2004, Giovanni returned to the family fold, to start work with his father and brother, Guglielmo, on developing the family’s Tenuta Santa Maria estate wines.

Ever the outdoors man, equipped with considerable energy and a lively, restless mind, Giovanni devotes time outside work on an eclectic array of interests and activities, from back-country snowboarding to scuba diving, cave diving, sailing and mountaineering, and commercial photography for design firms and architects.

During the winter months, he manages the Verona Ciné Club (showings every two weeks) and he is currently helping to design scenography for a contemporary opera by the Scottish composer, John De Simone.

The western world’s mainstream media outlets and wine and food industry still have a difficult time understanding that visibility does not, on its own, create an environment of diversity and inclusion (and often is simply tokenism) and the white mainstream still lack understanding of the difference between cultural appreciation and cultural appropriation. Only when the mainstream accepts and gives space to people of colour to create their own paths outside of the “traditional” and ensures that BIPOCs are in decision making roles with respect to the stories to be told, how they are told and who is telling them will diversity and inclusion be what it should be – which is a truer representation of society – rather than just a superficial marketing message solely for optics.