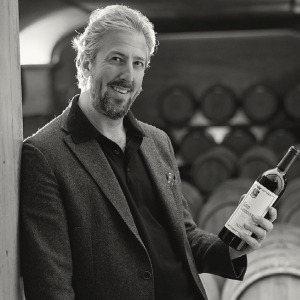 Anselmo Guerrieri Gonzaga was born in Rome in May 1978.

His passions have always been linked to the countryside and animals: he spent every summer in their estate in Trentino surrounded by the vineyards and then in his grandmother’s garden on the outskirts of Rome. The garden was called “La Landriana”, a place where she had created a magical world with the help from great landscape architects of the time. It is in these places that he has refined his knowledge and love for nature

After graduating from John Cabot University in Rome with a degree in Business Administration in 2000, he traveled around trying to find out what his aspirations were. Destiny soon brought him back to San Leonardo to support his father. In fact, in the summer of 2001 he started working on the estate covering a bit of all the roles from the simplest gradually to taking over the management of the company to which much of his attention and time still go.

He consider being a wine producer a privilege. He pursues his father’s vision focused on quality and people with great passion, never forgetting, as their motto says, that “The Earth is the soul of our work”.