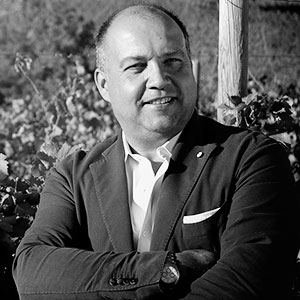 Alessandro Cellai is originally from Siena. In 1989 he obtained the diploma of Agrarian Expert with Specialization in Viticulture and Enology at the Istituto Bettino Ricasoli in Siena, and then enrolled at the University of Pisa, where he graduated in chemistry. In 2003 he obtained an Honoris Causa Degree in Agricultural Sciences at the University of Milan. From 1990 to 1995 he was Technical Director of Rocca delle Macie (Castellina in Chianti). From 1996 to the end of 2020 he was General Manager of the Group Domini Castellare di Castellina (Castellare di Castellina, Rocca di Frassinello and Feudi del Pisciotto), group with 150 hectares of vines, 1.2 million bottles produced and marketed in 70 countries around the world. Since January 2021 he has been winemaker and General Manager of Az Agr Vallepicciola, a company with 105 hectares of vines and 600,000 bottles produced. In 2000 he started producing wine at his own winery, the Azienda Agricola Podere Monastero, located in Castellina in Chianti with 3 hectares of vines and a production of 8000 bottles. Since 2019, he has also been consulting for various companies such as Castellare di Castellina, Feudi del Pisciotto, Rocca di Frassinello, Panizzi (Vernaccia di San Gimignano), Az Agr Podere La Villa (Chianti Classico). His consulting work, in addition to agronomic and wine making in collaboration with the company’s technicians, also concerns management control and sales support. In 2009 he was awarded by Decanter magazine as the best young winemaker in the world. 62 times he has been awarded with the 3 Glasses from Gambero Rosso. In 2011 “Le Sughere di Frassinello” was included among the TOP 100 wines of the world by Wine Spectator, an award also obtained in 2018 by “Nero d’Avola Versace”. In 2016, 2017 and 2018 “Baffonero” was awarded Best Italian Red Wine. “I Sodi Di San Niccolò” was awarded with an average rating of 96+ by Wine Spectator and Robert Parker. In 2019 – 2020 “La Pineta”, Pinot Noir produced by his personal company, was awarded Best Italian Pinot Noir. The same wine was awarded in 2018 with Il Sole di Veronelli (Top 10 Italian Wines). In 2019 “Chianti Classico Castellare” was included in the TOP 100 wines of the World by Wine Spectator.